One-room schoolhouses in Iowa is a topic rich in history. 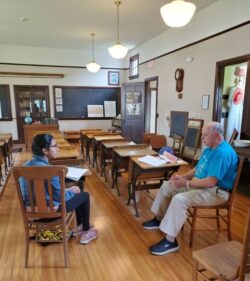 In this edited interview with William Sherman, an expert on the stories of one-room schoolhouses and their role in Iowa’s history, and editor of the book Iowa’s Country Schools: Landmarks of Learning, we learn about this historic format of schooling for so many children, and its continued influence today. He begins with a general overview of the one-room schoolhouse.

William Sherman: Every state, I believe, in America had country schools at one time. But the unique thing about Iowa and their role with country schools is that Iowa had the richest farmland in America. And we also had clusters of population and muddy roads.

The pioneer families that came into Iowa valued education; it was a priority. They wanted new land that they could farm, but they also wanted to be sure that their children got a good education. So, as we pushed the Native Americans out of Iowa through the treaty process, pioneer families came in, usually along the rivers.  The first public building in many places that were created were one-room schoolhouses. And on the eve of statehood, before Iowa became a state in 1844-1845, we had about 400 operating one-room schools in Iowa. And if we fast-forward to 2021, that’s close to the number of public high school districts — we have about 400 public high school districts in Iowa. And to me, and most people are amazed too, that we had 400 operating one-room schools before Iowa became a state.

Then the question is, well, how did those schools operate? Well, they weren’t always consistent, and the quality of the program, of course, depended on the teacher — just like today, in our public and private schools. Education varies from classroom to classroom, and good teachers make a difference. Usually, the farm families took up a collection and they paid to hire a woman; many came to Iowa with pioneer families. Although, we did have men that taught in one-room schools early on. 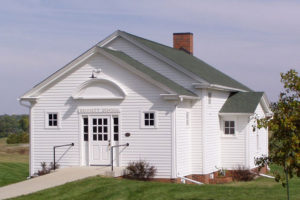 We have at least three schools preserved as museum facilities that were operating before Iowa became a state. That’s an amazing accomplishment, that we could have schools operating in the 1840s that are still preserved as museum facilities. One of the questions you ask about is regarding how schools got started, and why we didn’t have multi-grade schools? Maybe a simplistic answer is that there just weren’t enough children to warrant building a huge, multi-grade classroom building. But, they were eager to build a one-room school to get education started. And then these early one-room schools in Iowa — in many townships, were the only public building available. So, people living around the school used the country school as a community center.

Things that made Iowa a little unique compared with other states in America: we had more operating one-room schools for a longer period of time than any other state in America. 1901 was kind of our high point in terms of numbers of schools: 12,623 operating one-room schools in Iowa; most of the counties had more than 100. We started developing towns, and the governance early on were the township trustees. Some people felt it would be better to bring all the kids from the country into town and have a consolidated school. But, there was always this tension between farmers and rural people, and people living in town. The farmers wanted to have more voice and control the education. They, or the township trustees, could hire the teacher. In town, it was a school board. Sometimes farm people felt represented on school boards, sometimes not.

Gale Brubaker: Is that because they were receiving funding from the state, and they have to be open to the public, whereas the majority of Amish schools are not?

William Sherman: Yes, that’s the difference between the three public one-room schools for Amish children in Buchanan county. The other thing that’s unique about Buchanan county — we have, beside the public one-room schools, private Amish schools that are operated much differently, but they’re in one-room school buildings. They’re multi-grade. And I believe this is the only place in the world where we have this dual-system of public-private one-room schools for Amish children. In addition to the public Amish schools, we have other, what we call “exempt schools”: the state department of public instruction does a survey each year to find out how many schools are operating, and we have about 50-53 exempt one-room schools operated primarily by Amish Mennonite, some religious groups; 7-Day Adventist, the Montessori school, are examples. So we still have one-room schools operating in Iowa, and we will have, as long as we have Amish and Mennonite families living in Iowa, because they value education just like the pioneer families moving into Iowa in the 1830s-1840s. The other pressure, on the Amish teachers: if Amish children can’t read, then they can’t read the Bible. [And then they wouldn’t go to heaven], that’s the Amish belief, that you have to be able to read and follow the teachings in the Bible. And so there’s heavy pressure on the Amish teachers to make sure that the children in their school learn to read and write.

The state that has the most public one-room schools today in America would be Montana, because of the sparsity of population, and out in mountains, but there’s quite a few states that still have public, one-room schools. So again, the one-room school program will never disappear; I don’t believe. 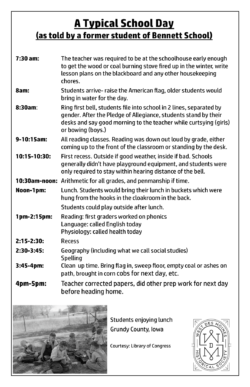 In a couple of your questions, you ask about the pandemic, and what influence it has brought back to families and children that didn’t feel comfortable attending the public school during the pandemic. Sometimes children could adapt to online, at-home learning, but some children couldn’t. And so their parents, or sometimes a teacher, would come in and maybe have a classroom in the backyard, with different neighborhood families. Basically, a multi-age classroom, where students advance at their own rate. I think we can make the case, and I’ve read a few articles, where the pandemic has fostered a return to the one-room school method of instruction.