As part of the Forever Free project, local students and mentors are researching people and sites that have a connection to the Underground Railroad in Iowa. One student, Brad Ernesti and mentor Ricki King have worked together to tell the story of a group of Freedom Seekers with an amazing tale! History buffs call this group “The Fab Four” and their story is one of bravery and fighting against the odds.

Anderson Hays escaped with three other freedom seekers, Henderson hays, John Ross Miller, and Alex Nichols in 1861 from Nodaway County, Missouri when they heard they were going to be sent south to Texas. The four freedom seekers followed the North Star to liberty in Iowa. The group made their way to Winterset, Iowa and were captured by slave hunters and placed in the town jail. A group of what John Ross Miller called “Republicans” encircled the jail and freed the freedom seekers and assisted them on their journey out of Winterset. The four men eventually made their way to Newton Iowa and were hired to work on local farms. At the out break of the Civil War all four men enlisted in Company E of the 60th Regiment U.S. Colored Troop. Henderson Hays and Alex Nichols both died while fighting in the Civil War. After their time in the Civil War, John Ross Miller and Anderson Hays returned to Newton and became prominent citizens in Newton, where they remained until their deaths.

Anderson Hays is at spot 21 in the photo below. 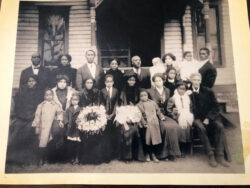 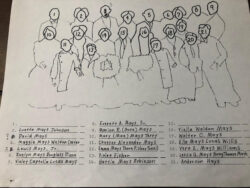 Our thanks to Mays Family Historians Evanette Luton and Billy May for permission to use this photo.

More about the “Fab Four” can be found on the Madison County Historical Preservation Commission website.