Face masks are encouraged but not required

School groups, private groups and virtual tours of the Jordan House Museum and Bennett School Museum can be scheduled Monday-Thursday and other times, based on staffing. Please call (515) 225-1286 for more information.

Join Douglas Jones, Archaeologist and Iowa Freedom Trail Project Manager, for a fascinating look at the largely untold stories of female Abolitionists and their families as they worked to help slaves fleeing to the North.

Combining genealogical research with other historical research has brought stories of several Iowa women who were involved in the Underground Railroad in Iowa. There are many connected families all over our state who risked it all to help fleeing slaves, and you’ll hear the

Love History? We’re Looking for YOU!

As the boys played ball on the freshly mowed field, the sound in the distance is a small Ford tractor finishing its clipping chores.  The scent of cut grass on this sultry summer dusk stirs the senses and teases the mind toward places far and times distant.  The daydreams eventually lead back to the here and now, but there was a time, since forgotten by most, when days of sport, smell and sound filled this docile field with a

Ladies and gentlemen, it is my privilege to be the first to congratulate you on your new citizenship. A little later this morning I will again congratulate each of you personally when I present you your certificate of citizenship, and I certainly look forward to that.

I realize that for many of you a difficult part of the oath of allegiance you just took is the part where you renounced allegiance to any foreign state or sovereignty. I wish to remind you that what you solemnly renounced 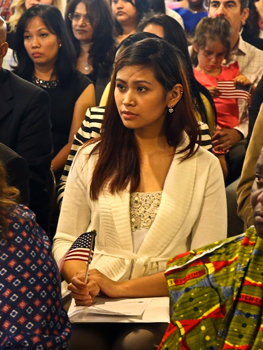 The Des Moines Register – A brief ceremony on Friday completed the naturalization process for approximately 65 immigrants who had met the requirements to become U.S. citizens. Naturalization ceremonies typically are

Over 1,250 school children from all over the metro area visited the Jordan House and were able to learn about the Underground Railroad along with all the important accomplishments James C. Jordan had during his lifetime.

I write to you as our fall colors blaze in reds, yellows, and browns, and yet snow is forecast for northern Iowa later today! Your West Des Moines Historical Society has been busy building new capacity during 2013. We are embarking on a major fundraising initiative to raise our organization’s profile, rebuild capacity, and provide funds for much needed repairs to the exterior of the Jordan House and the Bennett School.

In support of this effort, last month we launched a $250,000 Community

This year, the West Des Moines Historical Society was busy with many fun events!!

To kick off the event season, an Ice Cream Social was held in conjunction with the Historic Valley Junction Spring Art Market. Children’s activities, tours of the Jordan House, entertainment by singer-songwriter Lily DeTaeye, and (of course!) ice cream were featured during this fun event.

Next, Justin Roberts and the Not Ready for Naptime Players entertained audiences for 2 performances on June 22nd on the Bennett